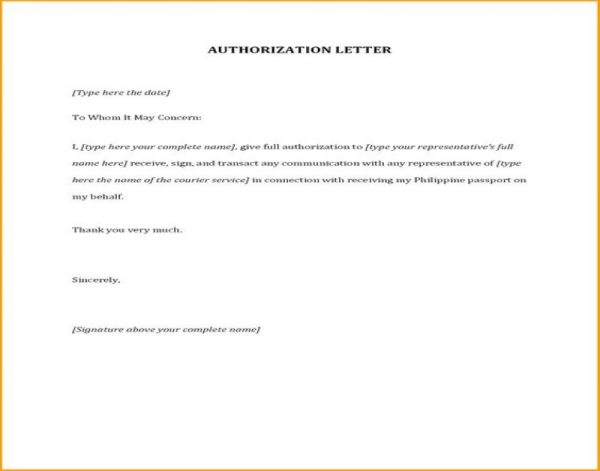 How often do you require permission to fulfill your wishes, desires and wants? Many times, perhaps. Remember the times when we were sent home with a permission slip for a school field trip for our parents to sign? That was for our guardian or parents to grant permission to the school to take us outside the school boundaries. Similarly, authorization letters are used in business settings by many organizations to carry out their business activities.

If you want to know about the ins and outs of a letter of authorization, then you have come to the right place. Here is all you need to know about it.

What Exactly is a Letter of Authorization?

It is a written letter or document that confirms a person’s authority, rank or ability to perform or enter a legal binding contract, spend a specified sum, take a specific action or delegate their powers or duties. To be precise, you will be able to act on behalf of a third party, especially when you are unable or unavailable to act yourself.

What Does an Authorization Letter Do and When Do You Need It?

How Many Parties are Involved in an Authorization Letter?

The three parties involved in the transaction process are also mentioned in the letter of authorization with their names and addresses. In case the second party is not known in a transaction, then you need to file an emergency action letter of authorization, addressing it To Whom It May Concern. The letter spells out some specific tasks being designated to the third party.

These tasks can be about anything but normally, they are for taking a loan, negotiating a contract or for accessing bank accounts. With respect to the law, the first party is bound by the actions of the third party. This is why letters of authorization must not be taken lightly because they are mostly financial in nature.

What are the Types of Letter of Authorization?

Here are a few types of letters of authorization that are commonly used.

Through this, they will be able to avail all the benefits. At times, their families are also given authorization. In order to avail that authorization, employees need to write an authorization letter that is a medical treatment letter of authorization to the human resource department of the hospital.

How to Write a Letter of Authorization?

Now that you know a lot about the authorization letter, let’s see how it is written.

Step # 1: Write Your Name and Address on Top Left Side

To begin writing an authorization, you should follow the standard format of the business letter. The first line of the letter of authorization should be written on the top left hand side of the page. You should write your name in the first line. In the second line, you should write about your street information (always ensure to write it correctly). In the last line, you need to write the name of your city, state and ZIP code. You should remember that all these lines should be single spaced.

After writing about your name, address, street information, state, city and ZIP code, you need to skip one line and write the current date on the next line. Always write the full date, such as August 19, 2016. You should not write the date in a shortened form.

Step # 3: Include Recipient’s Name and Address

After writing the date, you have to leave one line space and write the recipient’s name and address. Just like the way you wrote all your information, you have to include all the information of the recipient in the same way. However, you should keep in mind that you are granting authority to them to act as a proxy. This is why they will be able to act on your behalf. So, the letter should always be addressed to the second party.

After completing the letter head, now comes the time to write the body of the authorization letter. You should write the salutation using appropriate titles such as Mr., Mrs., Ms. and Dr. You should not use their first names. Also, the salutation should open with either To or Dear. Always remember to use the full name of the person to whom the letter is addressed. In case you do not know their name, you can include To Whom It May Concern.

This is the step where you have to specify the duties and specific details about the authorization you are granting to the other party. This part need to be precise, concrete and short. This is because brief letters reduce the level of conflicting interpretations. In this section, you should elaborate like I, (your name) hereby authorize, (proxy’s name) to carry out the following duties in my absence.

Along with the duties, you need to mention why you require a representative to act on your behalf. Now that you have assigned and discussed the duties, this is the time to specify the dates. You need to write about the beginning and ending date the proxy has been authorized to perform certain actions. In addition to that, you should also write about the restrictions that the proxy is not authorized for.

In the end, you should finish up the letter of authorization with a closure that is sincerely, thankfully and so on. After that, you should leave four lines for a handwritten signature and then write your full name underneath your signatures. You should also keep a copy of letter for your record.

A letter of authorization can be used for various reasons. If you also want to avoid making mistakes and save your time, you can download an authorization letter sample from our website and edit it according to your preference. Good luck!