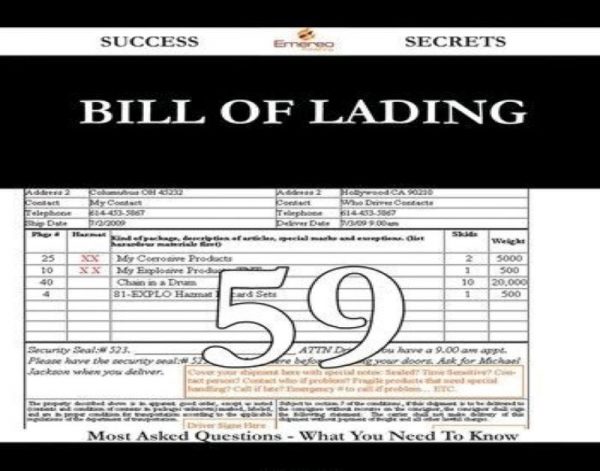 Business owners who often deal with international shipping may have come across the bill of lading. This is considered as one of the most important document for shipping transportation. Highlighting all the information as about the parcel, shipping method and from where it is coming and going, the bill of lading is really necessary to be filled. It is also considered as the evidence for the receipt of goods.

What is a Bill of Lading?

A bill of lading is often abbreviated as B/L or BOL. Basically, it is a legal document that is normally issued by a carrier and given to the shipper as a contract of carriage of goods. This can also be considered as the receipt of shipment for the goods delivery to a specific destination. The document is accompanied by shipped goods. It needs to be signed by the representative carrier, receiver or carrier. Regardless the form of transportation, this document has to be there. It secures both, shipper and the carrier. The document contains all the necessary information highlighting the types, destination and quantity for the goods.

To understand about Bill of Lading more clearly, let’s suppose that a logistics company has to transport gasoline to some place with a heavy truck. Before the gas is loaded in the truck, the driver and plant representative has to sign the bill of lading. When the gasoline is reached safely to the destination, the truck driver should get the document signed by the clerk as well or whoever receives it. This can serve as a proof. It also prevents theft for the company’s assets.

Types of Bill of Lading

This determines and confirms that the goods are actually on aboard. This is the most common receipt that is being used by the shipper. The shippers usually prefer this kind of bill due to security as there is no doubt that the goods are being on board. Also, no issue will arise with the bankers or consignee as it does early financial settlement.

Through Bill of Lading

This is another common yet complex type of bill of lading. This type of document permits the shipping carrier to transport the cargo using different kinds of distribution centers and transportation methods. This method also permits the transportation of goods at international shipment as well as domestic borders. This document highlights the quantity and type of transported goods, notifying the shipper for its destination. As the transporter can use multiple modes of transportation for this type of document, transporter can move products choosing any means and export them. If you want to transport goods across the sea, you will be required to have ocean bill of lading too.

This is the type of document that is required when the transporter moving the cargo across the sea, whether it is internationally or nationally. It serves as both, collection document, and is also a carrier receipt to the shipper. The ocean bill of lading is both negotiable and non-negotiable. The non-negotiable one permits the buyer to receive the goods only when they show up the identification.

On the other hand, the negotiable one will require the shipper to see the products and negotiate on the conditions of the seller. This document allows the shipper to ship overseas, but when the goods are required to be shipped over land, they will be required to inland bill of lading.

The goods transported over land can be travelled through the truck or rail. Another important thing that you should keep in mind about this document, is that the inland BOL permits the material to reach only till the shore unlike the ocean bill.

In this kind of document, the word shipped will not appear as the materials and cargo has already been sent and received by the party. It depends upon the ordering party to either keep the cargo in their warehouse or at their stores. After this document has been signed, the financial settlement will be made through the banks.

This is the type of bill of lading that determines either a damage or shortfall in the delivered goods. This type document is filed by the receiver. This typically happens when the shipped products are not up to mark due to any reason such as quality or quantity; they will declare the claused bill of lading form. It is also named as foul bill of lading as well as dirty bill of lading.

This can be a troublesome document for the exporters. This can also be problematic for the exporter to receive the payment due to damage or quantity or quality issue. Also, some banks refuse to accept the claused bill of lading; this is why purchases may rely upon the letters of credit for the payment of the goods.

Another common BOL is the agreement between the carrier and exporter regarding the property that is being transported. The uniform B/L ensures to provide basic information about the shipment such as the recipient and shipper’s names. Also, it highlights the shipment’s destination and its origin.

Also, it determines the transport time frame, carrier’s liability, how insurance will be applied in case of a claim, how can claim be filed for a foul shipment, how the shipment may be disposed off if the shipment is not delivered or refused.

This is the type of document that is also issued by the carrier. This type of bill of lading determines that the goods have been received by the exporter in good and appropriate condition. This is the opposite of the claused or foul bill of lading. This type of document provides relaxation to the exporter about the payment as well as the foul or damaged products or delivery can hold their payment. When the products are reached safely and without any defects, the product carrier will send a clean bill after inspecting each and every single thing thoroughly.

Purpose of Bill of Lading

Now that you know what is a bill of lading and what types it has, you should also explore the three main roles and purposes of bill of lading. Check out the B/L purposes below.

It Serves as Cargo Receipt

The core and primary use of the bill of lading is that it is used as a receipt. It is issued by the carrier once the goods are loaded onto the vessel. The receipt can further be used as an evidence for the shipment for insurance and customs purposes. It also serves as a commercial evidence of completion of the delivery contract.

Additionally, there are two types where it can be used as a receipt for the cargo. The first situation is when the goods have been delivered safely and the receiver declares that they are satisfied with the goods. Ultimately, when there is no discrepancy between the described goods by the shipper and the actual goods on board, it can serve as a cargo receipt.

Secondly, the bill of lading can be treated as the cargo receipt when the receiver finds discrepancy between the goods received and the ones shown by the seller. Also, there are chances that the goods can get damaged during the transportation or may lack in quality. No matter what the situation is, the receiver has to receive appropriate goods. If they do not find them appropriate, they can claim for the claused bill of lading.

It Serves as a Contract Carriage

In addition to serving as a cargo receipt, the B/L can also be used as an evidence of the contract of carriage. The BOL is a contract carriage between the carrier and shipper, and is thus required to transport the freight as discussed by the seller and buyer. Additionally, when the shipper and carrier have formed an agreement together, it becomes the liability of the shipper to send the goods to the carrier. Moreover, there are cases when the BOL is used as bona fide. Then, it becomes a definite proof where no contradictory evidence will be made.

It Acts as a Title

The BOL contains the name of the document and it is normally related to the case of the buyer. When the buyer receives the goods from the carrier, the B/L acts as document for the title of goods. There are two ways in which this document can act as the title. The two types are the order BOL and straight BOL. In the order B/L, the document is not issued with the name of the consignee and is negotiable. It means that it can be negotiated to the third party.

Necessary Things That Should Come Under the B/L

Just like booking an airline travel, the shipment bookings can take many routes and forms. There are certain things that need to be mentioned clearly in the bill. Check out the necessary elements that you should not forget covering under the bill.

Parties Involved in the Process

B/L is a very important document for your business if you deal with transportation frequently. Check the number of templates available for free at our main website including B/L templates too. Download and simply edit the BOL form and save your time!