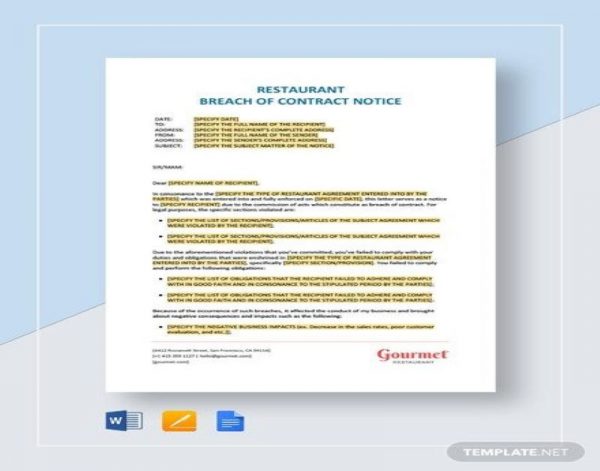 Ideally, when two parties enter into an agreement, they both benefit from it, are both pleased with how the agreement turns out, and no disputes occur. However, things aren’t always this easy in the real world. Delays tend to happen, financial issues arise, and other events come up which may prevent or hinder the success of a contract.

What is a breach of contract?

When you enter into a business contract, you have to perform specific obligations which you must fulfill to avoid any legal issues. Legally, if either one of the parties involved in the contract doesn’t follow the terms of the agreement, this becomes a “breach of contract.”

Types of breach of contract

There are different types of breach of contract examples available. No matter what type it is, a breach of agreement or contract occurs when one party fails to fulfill his legal obligations as stated in the document. Here are the main types of contract breaches:

When to use a breach of contract notice or document?

A breach of contract form or letter allows you to clarify the situations so all parties go back within the boundaries of their agreement. Use this type of document if:

No person or entity enters into a contract intending to perform a breach. Sometimes though, no matter how you plan things, a breach of contract still occurs. In such cases, you need to provide notice to the party at fault. Contracts contain terms which both parties must follow.

Giving notification to the other party is an important step to remedy the potential issues caused by a breach of agreement. Even though a notice might not fix everything, it’s a significant step to take, especially in keeping your legal rights protected and in moving forward. When creating a breach of contract letter, make sure to specifically explain how the other party isn’t fulfilling his obligations.

Parts of a breach of contract letter

Before you take legal action because of a breach of agreement, the first thing you must do is compose a letter about this breach. This type of letter is the “opening act” in several legal proceedings and it contains the details about your claim. It also happens to be a very cost-effective way to deal with conflicts and disputes. When drafting the letter, make sure that it includes the following:

Proving a breach of contract

No matter what type of breach of contract example you’re faced with, you must start every legal argument off by establishing the following:

How to remedy a breach of contract?

Be the first to review “Breach Of Contracts” Cancel reply
Print