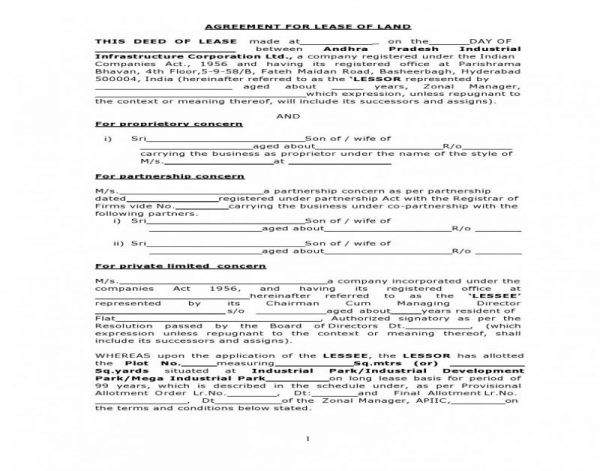 Land leases are not that uncommon, especially for people in need of land but cannot afford to purchase it or would rather lease than own. The land lease agreement isn’t that complicated, being a contract between the landowner and the lessee. The agreement can also become a farm land lease agreement between the owner of a vacant piece of land and a person who intends to use this for farming purposes.

What is a land lease agreement?

A land lease agreement is also known as a ground lease agreement and it allows the tenant to use the land owned by a landlord in exchange for a defined amount of rent. These agreements are similar to the manner standard property leases work where the tenants may enter into commercial and residential agreements.

When to use a land lease agreement?

There should be no argument there and, as a matter of fact, the agreement provides several benefits for the parties involved. You can apply a simple land lease agreement if you own vacant land and an interested tenant.

Elements of a land lease agreement

A land lease agreement exists between two parties, one who will utilize the land (tenant) and the other who owns the land (landlord). The tenant can use the land as per the agreement for either agricultural, recreational or commercial purposes.

When making the agreement, make sure that the expectations and responsibilities of both parties are clearly defined so that there will be no confusion between the contractual parties about how the tenant will use and manage the land. Here are the elements of such an agreement:

Farm land lease agreements can have several variations. Most of these come in the form of written contracts. However, because the parties concerned often know each other personally and have been in business for a long time, some of the agreements aren’t done in writing. In such cases, enforceable leases may get implied through the actions of each party or communicated verbally.

The problem with this is that verbal leases are often difficult to prove, thus, they may easily get terminated. The farmer can gain control and possession of the owner’s land through the payment of rents that can also come in varying forms. Most, though, need fixed cash payments while others may ask for a portion of the profits of sales of livestock or crops produced by the property. Farm land lease agreement may come in the form of:

What happens when you don’t have a land lease agreement?

When there is a written land lease agreement, this can prevent outside entities from thinking of the arrangement as a joint partnership instead of what it truly is, a landlord-tenant relationship. Usually, a tenant incurs debts when taking out a loan for the purpose of making improvements on the property.

Land lease agreements may include an explicit “No Partnership” clause to protect the landlord from creditors who might come after the land should the tenant fail to settle his financial obligations with his creditors. As a landlord, you would always take precautionary measures to protect your interest.

Lease agreements you enter into should include language to protect you from financial issues that the tenant might encounter while the land is in use. The simple land lease agreement should specify that no partnership exists created between the tenant and the landlord. Depending on how you documented your agreement, it could either be one of the following:

In summary, a land lease agreement prevents future conflicts between the involved parties who might file a lawsuit to quiet title in claims for adverse possession should there be any doubts as to the property’s ownership.

It’s time to bring your property management to another level. Get all the professional-grade property templates you need to plan, start, organize, manage, and grow your business; one click away in the links below!