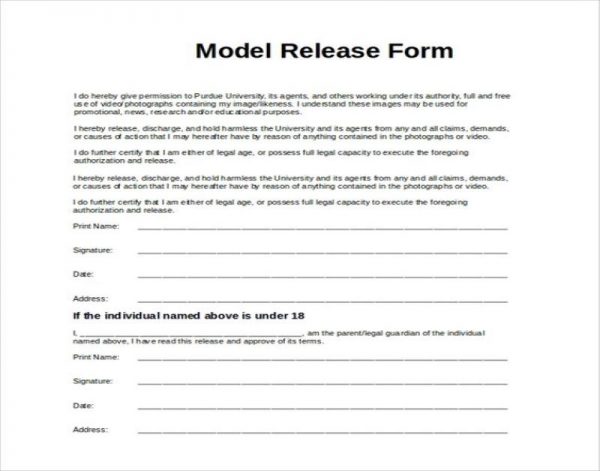 A model release form is a type of legal document between the photographer and the individual or company who owns the photographed property. The Model Release Agreement is written permission which allows you to publish or use the image on marketing materials, blogs or websites. Sometimes, they can also include the compensation for the photographer or the model depending on the situation.

What are model release forms?

Models have the potential to become a master of different things. From walking to posing, hair, and makeup, there’s no limit to what you can do. You can even get to know the business side of the modeling business which is something that remains unknown to a lot of people.

You don’t have to feel intimidated upon hearing all of these responsibilities. Once you’ve gained enough experience in the modeling industry, the business side becomes second nature to you. If this is new to you, one of the first steps to take is to know about model release forms. This is a legal document that’s commonly used in the world of modeling.

Contents of a modern release form

A model release form isn’t a standard document. This is because they can vary in terms of the legal jargon used, the content, the protection level, and more. For most free model release form templates, you can expect these basic elements:

Do I need a model release?

If you think that the need for a Model Release Agreement depends on the use and not on the content, you then need to answer some basic questions. First of all, you may ask “Will you use the photo commercially?” If the answer to this is yes, then you need a model release form template. But if the answer to this is no, then you won’t need one, right?

Well, it’s not that simple. When it comes to publications, this doesn’t automatically mean that the person will use the photos commercially. For instance, photos which will appear in trade or consumer publications, educational books or newspapers might not need this form because they’re considered “editorial use” or “fair use.”

Conversely, commercial usage may include catalogs, newsletters, web use, brochures, advertisements, greeting cards, and more. For licensed commercial use, you need to use a free model release form. But what is or isn’t meant for “commercial use” can be a bit confusing.

Let’s assume that you’ve taken a photo or a famous chef and you didn’t let him sign a model release form PDF. Then you have a friend who happens to be the editor of a local newspaper. He pays you for the photo because he needs it in an article which features the restaurant where the chef works.

Since the editor will use the photo as part of the paper’s news story, it’s used for an editorial purpose. Even though he paid you for the photo, this doesn’t automatically make the photo “commercially used.” But if the PR agency of the restaurant wants to make use of the photo you took in one of their ad campaigns, you need to have the release form.

Do you need a model release for street photography?

You don’t need a photography model release form when you’re taking photos from a public place. But it’s always better to err on the side of caution and still obtain the form. Although this isn’t always feasible, it’s still a more appropriate course of action.

What is a photo consent form?

In simple terms, a photo consent form is an agreement or contract between the photographer and his subject, his client, and the person who owns something in the photo. This consent form gives you legal permission to use or publish photos of property and people on online media, printed media, and everything in between.

A model signs the model release form template to give permission to the photographer or the person who created the release. If you plan to create such a form or use it, here are some FAQs to help you understand them better:

It’s important to keep your photography model release forms as long as you possibly can. The reason for this is that the forms don’t have a statute of limitations and they don’t run out. Every time you want to use the photos, you need to have the form ready. This will protect you from any issues which might arise in the future.

There are some cases when people feel hesitant when asked to sign the form. This is especially true if the release doesn’t specify when and where you plan to use the photos. If the release form states that you can use the photos for anything, anywhere, and at any time, the subject wouldn’t want to sign.

In such a case, you must respect the decision of the person. You can either find another subject or make the terms of your release more specific. That way, your subject will feel comfortable in signing the agreement, especially if he/she understands and agrees with everything on the document.