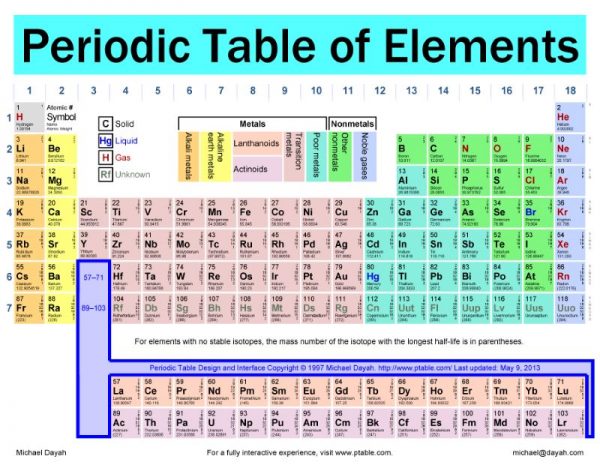 The printable periodic table of elements is a table that represents the 118 elements recognized by IUPAC, the International Union of Pure and Applied Chemistry. Four of these were added in 2015 and will not be officially named until the end of 2016. This article focuses on the history of the Periodic Table of Elements and on how to use the table. It will help a person use a printable periodic table.

History of the Periodic Table

The study of the elements goes back to ancient times. The work that led to the periodic table began during the Age of Enlightenment. At this time, people began conducting chemical experiments. This led to the discovery of new elements. Scientists continue to find elements and learn about them today. Below are some of the people whose work contributed to the formation of the periodic table.

Robert Boyle developed the definition of an element around 1650 that was used for 300 years. He defined an element as something that cannot be broken into smaller parts by a chemical reaction. Scientists used this definition until subatomic particles were discovered.

In 1789, Antoine-Laurent de Lavoisier wrote the Elementary Treatise of Chemistry. It was the first textbook devoted to chemistry. In it, he identified several new elements, including hydrogen, nitrogen and oxygen. He divided his elements into two groups, metals and nonmetals.

John Newlands published works in the early 1860s that divided 62 known elements into groups of eight. He was the first scientist to assign elements an atomic number. His number was based on an element’s mass. He also paired elements with masses that differed by a factor of eight. Newlands work was not appreciated at the time, but today, he is credited with the first use of the term periodic in chemistry.

In the 1860s, three men independently published periodic tables: Dimitri Ivanovich Mendeleev, Lothar Meyer, William Odling. Mendeleev is credited with the development of the modern periodic table because his work was the most innovative and adaptable. His table not only documented known elements, it allowed space for the discovery of new ones. It had several interesting features:

In 1923, Horace Groves Deming published the 18 column periodic table that is common today. It was during the middle part of the 20th century that scientists discovered protons. Since then, the atomic number of an element has been based on the number of protons it contains.

During his work on the Manhattan Project, Glenn T. Seaborg began speculating that additions needed to be made to the periodic table. In 1945, he published a paper that said the actinide series of elements should be added to the periodic table as the second row of the f-block, below the lathanide elements. Fellow scientists discredited his suggestion at first but later research proved he was correct.

Since the 1940s, scientists have discovered the transuranic elements, numbers 104-118. The most recent of these were officially recognized in 2015. They completed the seventh row of the table. Little is known about some of these elements because they are unstable and decay rapidly.

How to use a Printable Periodic Table of Elements

Periodic tables are divided into cells. Each cell represents an element. Rows are called periods, and columns are called groups. Elements with similar chemical characteristics are given a group name and colored the same color, in some tables. There are also four blocks, each containing different groups. These are listed below:

Each printable periodic table can include different information in a cell. However, most include two pieces of information. One is the element’s atomic number. This is at the top of the cell, in the center or to the left. Also included is the one or two letter atomic symbol. This represents the Latin name of the element, like Ag for silver. Following, is a list of other information that can be included in the cells

cell key- Sometimes a cell key is included in a periodic table printable. This provides labels saying what each item in the cell means.

information box- Designers can include a box of information about different chemical terms in their periodic table printable.

Periodic tables can be used to learn about elements and solve chemistry problems.