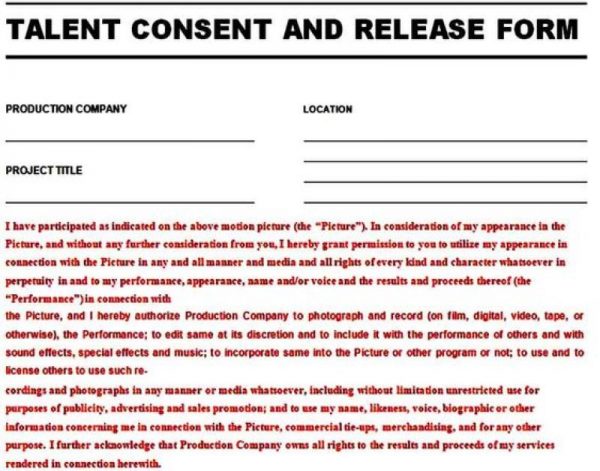 People who work in the entertainment industry know the importance of a talent release form. You should always know how and when to use this as it could save you from any potential lawsuit. Whether you’re working with a crew of 5 or 500, a talent release form template is vital as it gives you legal the right to distribute the final result legally.

What is talent release form?

If you plan to record other people for films, commercials, and more, you should know when and how to use a talent release form. If you have been in the business for some time now, you would have already used a talent or film release form template as this is an important requirement. It even applies to the recording of pets and animals.

The form is an official document designed for the purpose of protecting you from lawsuits for the unauthorized usage of a video or audio recording, whether it’s visual or voiced. Although the form may sound simple, it’s part of a more comprehensive agreement. Often, though, it’s a separate document.

What does the term “talent” mean in a form?

For the purpose of the document, “talent” here refers to whoever you’re recording, whether in photographs, audio or video. Talent can refer to people, animals, and anything or anyone else that isn’t YOU including:

Talent is a generic term in the industry used to refer to professional models and actors although, at times, you can also use it to refer to unpaid actors, non-professionals or animals used in still photography or videos. In the case of radio ads, podcasts, animated videos or other productions that only involve audio, the “talent” could be anybody, whether professional or not, or unpaid or paid, who will do the voice-overs or voices for your project.

What to include in a talent release form?

The main purpose of a talent release form is to protect you from lawsuits for unauthorized use of someone’s image or voice. The form can either be part of a longer and more comprehensive agreement or a separate legal document. A standard talent or film release form template should cover the following information:

If your talent is a professional actor, celebrity or model, the talent release form may have limitations regarding the use of the recording instead of providing broad authorization. Some talent release forms may contain extra provisions like allowing you to copyright the recording, waiving any future compensation, allowing the image of the talent to get digitally altered or allowing the utilization of the biographical information of the actor in promotional materials.

Other details and information in the form may vary, depending on the intended use and nature of the recording. Although forms are relatively short and simple, it is nevertheless important to complete for any recording to avoid any issues that may come up later when the recording gets distributed.

When and how to use a talent release form?

Anytime you use talent on camera, especially if you have plans to distribute the film, make sure you also have a talent release form with you. In journalistic situations, even a simply worded statement is enough. However, with large productions or narrative films, a physical form becomes vital.

Distributors usually ask for a copy of your video production release form if you want film distribution for your film. If you do not have this, you may have to search for and get all of the actors and extras sign a copy after filming. For this reason, it’s highly recommended that you get everyone to sign the release form even before you begin.

Most talent release form templates are pretty straightforward. You only need to fill out the blank fields and take note of where to affix signatures. For talents below 18 years of age, it is either the legal guardian or parent who signs the form. Some forms cover not only production but also promotional materials.

After signing the form, it’s always recommended to make a copy for yourself and a copy for the talent. If you have a computer, scan the signed document for storage purposes. Keep in mind that even if the wordings for a talent release form may allow the use of “gotcha” style journalism, it’s always best to consult with a legal professional before you distribute content that might be later on deemed as defamation.

When you take recordings for personal use, you may not need a talent release form. However, it is always prudent to have a document prepared and signed if you think you may later display it offline, online, in public or even if you don’t use the recording commercially. In such a case, have the document signed even before production. However, there are some exemptions when it comes to talent release forms and these include:

What is a deal memo for actors?

Deal memos which are also known as crew contracts are documents you have signed before the completion of shooting. These are usually created by the production company and it serves as the legal agreement between yourself and those who hire you.

In simpler words, a deal memo is a contract of terms between you and whoever holds the finances for the production. It addresses the common parameters that are typically used in most employments like overtime pay, day rate, if there is an inclusion of meals, and other conditions. But like everything else you put your signature on, make sure that you know what you’re getting yourself into with a deal memo and that you’re getting a good deal.

Aside from the basic talent release form, there are also some forms you may want to consider before filming starts. These include:

Make sure to get all these forms ready for signing before starting your shoot. The procedures to do so are pretty straightforward but here are a few things that need to consider to make sure everybody feels comfortable with the whole process.